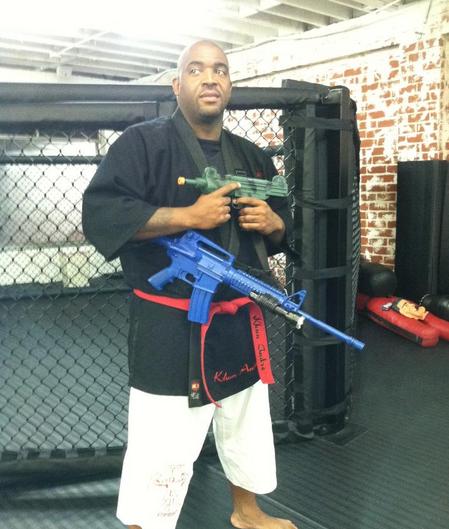 * 360 Kombat training provides you the skill and common sense to protect yourself and loved ones. 360 is easy to learn and to apply the technique to real world situations. Why wait when it’s too late. Always be prepared and that’s why I recommend 360 now! I hope all is well sir.  Mr. L.Steve - Atlanta

* My name Jon Ramsey over 45. years in martial arts my rank is 8th degree blackbelt APKKA in Los Angeles.
Training in 360 kombat have opened my eyes to multiple  was to use the knowledge  I have in a more effective way. GM Andre Glenn is a amazing  instructor.  His system simply works. and adepts to any system.
I recommend. for anyone any age or ability to train with this gentleman.

* Training with grandmaster Andre Glenn has been a privilege and an honor.  Understanding his 360 Kombat program is not only effective, it’s necessary.  Learning from him in regards to secured spatial awareness, innovative combat techniques, and dynamic executive protection training is one of the best I’ve ever experienced outside my Father SIJO Mutakabbir.  They are the last samurai and they are national treasures.  The applications for these art forms are very REAL! All must come and learn, as grandmaster Glenn is of rare find.

* Andre Glenn is both a friend and mentor of mine. Having spent time with him on the mat, I can tell you that his 360 kombat system is everything you have heard. There are no gaps in 360 kombat and it has an answer for any and combat situations, be it military or civilian. If you want to survive in the real world then 360 Kombat is for you!

* 360 combat is bar none the best I've encountered In my martial arts career I've achieved my black belt in karate my second in taekwondo but never felt that I truly could defend myself until grandmaster andre Glenn he is realistic approachable and I never felt like he was in it for the money he cares about self defense and I don't only think he's my teacher but my friend I would definitely recommend him to anyone serious about self defense.

* 360 kombat is a simple and effective tool to learn and use. The majority of the techniques are easy to retain which makes it easier to remember in time of need. This training I would highly recommend to others!

* 360 Kombat was extremely useful. A lot of disciplines are for show and for sport. 360 was for everyday use. Relevant to real life situations. I feel confident in protecting my family because now, I truly feel prepared.

I would highly recommend this to any and everybody.  Mr.K.Felder -Atlanta


* I’ve trained and taught for the last 43 year's. In Multiple systems, what I would like to say about Master Andre Glen system is he an innovator, It doesn't mater If your a Master of the Arts or a beginning practitioner Each person will truly come away with some valuable Knowledge that truly can be used.Master of the Arts

* “As someone who had studied martial arts for twenty-three years before beginning my study in 360 Kombat Systems, I found 360 to be the perfect complement to all that I had studied before, because it closed the VIOLENCE GAPS that was missing from previous training and would recommend it to everyone”

* Grandmaster Andre Glenn is a personal friend and colleague of mine.  He is a professional elite Bodyguard, excellent in judo and in weapons for the novice to military or police officers due to his many belts in Mixed Martial Arts.   He worked with me at my Dojo in Dunwoody for many years... He is dedicated, honorable, funny but serious when it comes to safety.  I trained personally with him when I had to before the Intl GOJU grandmaster and show my school was dedicated and honorable and I was strong enough to be apart of his blackbelts.  Seriously that organization is hardcore and I had 2 awesome blackbelts teaching at my Dojo.  Andre made sure I was in shape and could handle the trendous pace of a hard core  International
Workout for their blackbelts only.
I had to show my resilience and skills along with the others so our school would be allowed to be affiliated with their organization.
Grandmaster Andre worked with me with weapons and endurance...Because of him I was honored at the table of the Grandmaster.  I was only a 3rd degree blackbelt but I was teaching mixed Martial arts to children, teens and adults.  They train extremely hard in Russia and I was able to stand with them due to Grandmaster Andre's.   He teaches regular people giving them tools in 1 hour or 2 hour sessions when he comes to Atlanta.
I want to publicly thank him for his friendship, loyalty, and help.


* Being a student of martial arts for over 27 years I have studied several different disciplines, being in law enforcement I understand what works. The methods developed in 360 Kombat are real work methods for unconventional encounters. The way of the real world is not scripted with very little areas to make mistakes. When in a dangerous encounter your goal is to win at all cost. 360 Kombat is an art form that can be learned and used by the novelist after a short time of instructions. Swift and brutal is the way to survive dangerous encounters not rolling on the ground hoping someone else does run up and stomp your lights out as you play chess using a sport during war games. 360 Kombat helps you win so you can be the one that deescalate the situation to ensure your saftey.  I recommend 360 Kombat to any person male or female, young or old to be used as a method of self protection against individuals that mean to do you and your family harm. 360 Kombat is an art that can be used even when you have been injuries and your body is not at its full ability by the use of effective techniques using body mechanics to manipulate your opponent to ensure a positive outcome.


* I’ve been training in MA since 1978.
I observed, in a recent seminar, 360 Kombat trainer Mr. Glenn share/teach an unbelievable seminar with his students. It was so much applicable information, that I was blown away at the devastating power it gave his students.